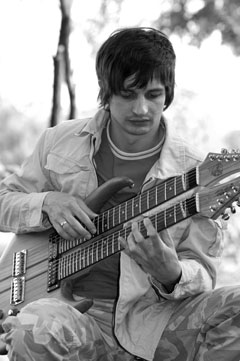 Hi! My name is Adam Fulara. I'm 44 years old. I live in Ostrzeszow, Poland. It's a small town in the middle of my country. Please email me

regarding any mistakes I may have made on this page. My English is far from perfect.

I'm a Computer Science/Electrical Engineering graduate from Wroclaw University (it's a famous university in Poland). My specialty is software engineering.

My main hobby is music - I have been making music for 34 years now.I first started as an accordion and piano player while in a six-year course at a music school in Ostrzeszow. When I was in fifth grade, I took up the guitar. At first I played rock music - I liked Steve Vai, Yngwie Malmsteen, Joe Satriani, Marty Friedman, etc. I had my own band and we gigged frequently, on occasion opening for famous Polish bands like Houk or Armia.

In school, I learned many polyphonic pieces by J.S. Bach. I liked this type of music, but I couldn't play the entire work when I was just starting to play the guitar (using standard techniques). I could only play one track (either the left or the right hand side of a piano transcription). However, when I employed the two-hand tapping technique, I could play the entire piece.

I have been using the two-hand tapping technique for 27 years now. I play a special doublenecked tap-guitar, made by REK Guitars according to my own specifications.

Currently I play with my trio: Full-X (tap-guitar, bass and drums). The main goal of my musical development is counterpoint improvisation based on Cantus Firmus method as well as on bebop. We play our own compositions and standard jazz. I play Classical music too - I like listening to Bach, Chopin and Beethoven, but in the future I want to play only Bach tunes, and counterpoint improvisations with my band - this is what I like.

Many gigs in clubs in Poland, Germany, USA, and other countries...
[Photos, posters...]